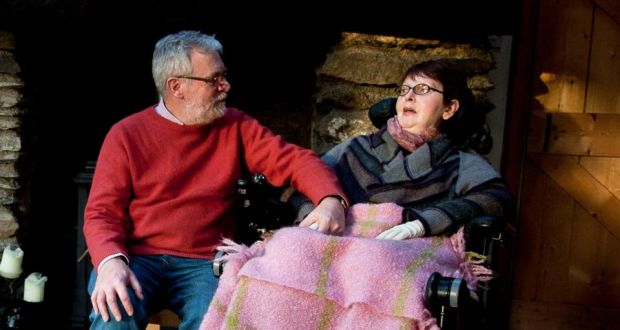 I came to Marie Fleming’s book knowing just a few facts about her. I knew that she suffered from multiple sclerosis. Faced by the certain prospect of an even more egregious deterioration in her already frail health, which would deprive her of the capacity to end her own life if it became unbearable, in 2012 she took a landmark case against the State to lift the ban on assisted suicide.

I knew that her life partner and carer, Tom Curran, had emerged as a stalwart source of support in her life and her struggle to win her right to die. I knew she was the mother of two adult children. I knew she lost her case but that the President of the High Court, Mr Justice Nicholas Kearns, had been moved to describe her as “in many ways the most remarkable witness which any member of this court has ever been privileged to encounter”. I knew she died from MS shortly after the case.

What I did not know was the remarkable story that this quite remarkable woman has to tell about her life – and about an Ireland that continues, like a geyser, to throw up extraordinary stories of private and communal cruelties that we are still trying to work out of the Irish system. Apart from anything else, her story of growing up in Co Donegal in the 1960s and 1970s will now join that rich stream of cultural history.

Beaten with a birch rod

Marie Fleming was the first child of a deeply troubled marriage. Her mother, already pregnant with Marie, was married at just 16 to her father, who was twice her age. Her mother – “the most beautiful person I ever saw, except for Elizabeth Taylor” – emerges from Fleming’s account as demanding, capricious, cruel and deeply resentful of her fate in life, and particularly resentful of her husband, whom she regarded as insufferably dull and her social inferior. Her relationship with her daughter was cold and harsh. Fleming describes being beaten nearly every day with a birch rod – severely enough to leave weals on her legs and her mother shouting: “Ye good-for-nothing mad bitch”. Fleming did not know if her mother saw her as the cause of her bad marriage or “whether she just didn’t like me”.

Her parents went on to have four more children, and Fleming watched as her mother lavished affection on her siblings, particularly her younger sister, while ignoring her. “I hated her,” she says, “but I craved her love”. This theme became a constant in her life.

The family were poor, although her mother kept up appearances and was a skilled seamstress, making clothes, curtains, cushions and quilts for their house. Her sister and brother were encouraged to leave school to work at the local factory at the age of 12. Fleming, a devoted reader with a promising academic record, continued to 14, but it was with no encouragement from her parents. Then disaster struck. Without warning, her mother ran off with Paddy McGowan, the local hotelier and senator. But it was a very Irish affair.

McGowan, a married man with eight children, stayed safely married but ensconced Fleming’s mother in a succession of bed and breakfasts in Dublin. Fleming’s distraught father ordered Fleming out of school, to take over the running of the house and care of the entire family. She says simply: “It spelt the end of my childhood.”

Overwhelmed, shamed, gossiped about and ostracised by many in the town, she began the back-breaking routine of running the house while becoming an emotional crutch for her father and a substitute mother to her frightened, inconsolable siblings.

Her father, not knowing where his wife was, dragged his family around in fruitless searches for her.

But then, just as suddenly as she had left, her mother returned – even more resentful and hostile. Their father warned them not to annoy her “or she’ll go away again”. But, despite their frantic efforts to please her, she did leave – a cycle she repeated five times in all. Fleming describes how her mother once went away leaving potatoes boiling on the stove and her youngest child, then aged two, alone in the house. Eventually, pregnant by McGowan, she left for good.

The high drama finally culminated in a celebrated court case that her father took against McGowan in 1971 for alleged “criminal conversation” with his wife and enticing her away from “his house and society”.

Meanwhile, unknown to her father and family, Fleming, who was now 16, lonely and in love for the first time, had sex for the first time with her boyfriend – a hurried, confused and painful encounter – and promptly became pregnant. Sitting in the High Court, frightened and distraught by the prospect of being called as a witness to her mother’s infidelity, she feared most of all that her pregnancy bump would show.

But an even greater shock followed. During the trial she discovered not only that she had repeated the cycle of her mother becoming pregnant at 16 but also that her mother’s mother, Gracie, had done the same. Gracie’s baby – Fleming’s mother – was reared by Gracie’s own mother, and so the woman Fleming knew as her beloved grandmother was in fact her great-grandmother. “That’s when everything clicked into place”.

Gracie had gone on to marry well. She and her barrister husband owned a stud farm. Fleming remembers her mother visiting Gracie and coming back with tales of their high life – and of Gracie “looking down on us and making Mammy do the same”.

Fleming’s account of her difficult and lonely labour in a mother-and-baby home and the fierce struggle she put up to keep her baby daughter, Corrinna, in the face of the equally fierce pressure from the parish priest and her father to have the baby adopted has a depressingly familiar ring.

More striking is her account of McGowan driving her, heavily pregnant, to meet her mother. Bizarrely, he had housed her mother, with her baby, in a battered mobile home in the middle of a field. Her description of the meeting – a mixture of grim horror and high farce – could have come straight from the pen of Patrick McCabe.

Her subsequent life – including two failed marriages, the birth of her son, her continuing dogged attempts to look after her father and siblings, taking her mother in when she was finally dumped by McGowan, her relentless quest to complete her education, finally finding a lasting love with Curran, the onset of MS in her 30s, and her heroic struggle against the devastation it wreaked on her health and life – forms the second part of the book.

Although it is crucial in building an understanding of the person she was, the largely chronological account of events inevitably suffers from being wedged between the high dramas of her early years and her own High Court case.

In his foreword Curran says that some of the book was dictated; this may account for the rather flat quality of this part. Yet, despite this, Curran and Corrinna emerge strongly as interesting and quietly heroic characters in their own right.

By the time we get to the High Court there is an inevitability about why Fleming chose to take the case. It was not courage that motivated her, she says, but “anger, determination, and a desire to protect Tom. It’s simple. I want a dignified death, and I cant have that without Tom’s help.” Drawing a parallel with her father’s case, she says: “It meant everything to me, and the same was true of Daddy”. The reader, already familiar with the deep wells from which that anger, unstoppable determination and great capacity for love arose, already understands her final actions.

I suspect Marie Fleming would be rather pleased that her memory may be defined not only by her MS and her campaign for the right to die but also by her being a woman whose life was bounded and shaped by love: its absence from her mother, her own sacrificial love for her father and siblings, her fiercely protective love for her two children and her partner, and, most poignantly, her love of life itself.