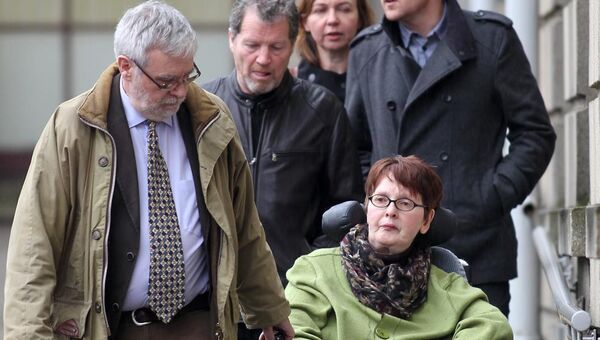 Tom Curran, the widowed partner of Marie Fleming who lost a landmark case on the right-to-die, has accused the DPP of ignoring the Supreme Court’s wish that guidelines be introduced to set out when people who help their loved ones to die would face prosecution, Dan Buckley, Irish Examiner, 30 Apr, 2015.

Speaking after Gail O’Rorke was acquitted of assisting the suicide of her friend, MS sufferer Bernadette Forde, Mr Curran said she should never have been subject to a criminal charge

However, the prosecution has been defended by the Pro Life Campaign, which described the DPP’s decision as “reassuring”.

Ms O’Rorke is the first person to be prosecuted under the 1993 Criminal Law (Suicide) Act. The law decriminalised suicide, but it remains an offence to assist or attempt to assist another person to take their own life.

“Gail should never have been in court, based on what was said in the Supreme Court in Marie’s case and that was that the DPP in UK has issued guidelines as to when a person might or might not be prosecuted.”

Speaking on RTE’s Morning Ireland, he said: “The Supreme Court judge felt certain the DPP would use those same guideline but they weren’t.”

Despite finding against Ms Fleming, the court also said there was nothing to stop the Oireachtas from introducing legislation to deal with such “tragic” cases.

“Six people travelled to Switzerland up to this particular situation with Gail in 2011,” Mr Curran added.

“Since then, because of fear, they are travelling through the UK where the prospect of them being prosecuted are very slim. This puts people in a much more difficult position.”

While the Oireachtas has failed to move on the issue, Mr Curran has spent the last two years working with a legal team to bring about such legislation which is to be presented to the Dáil by Waterford TD John Halligan.

Mr Curran said he was aware that safeguards had to be included in any legislation to ensure that vulnerable people were not taken advantage of.

“When the Government decided to decriminalise suicide, they realised that vulnerable people could be exploited, but it was never envisaged for people like Bernadette Forde and Marie. No law is absolute, but in this particular case, it is realised the law is wrong so why not go about changing it?

Commenting on Gail O’Rorke’s acquittal, the Pro Life Campaign said it was important that every effort was made to reassure the seriously ill that they are cherished members of Irish society.

Deputy chairwoman Cora Sherlock said: “People who are living with serious or terminal conditions are extraordinarily vulnerable to feelings of isolation, despair and various external pressures from the people around them. While those pressures may often be motivated from good intentions, euthanasia and assisted suicide should never be seen a solution.”

She said: “The best way to reassure the terminally ill that their lives matter just as much as those of healthy citizens is to provide them with proper palliative care.

“It is reassuring that the DPP prosecuted this case and has shown that the law can and will be used to defend the rights of vulnerable members of society in situations where there is some concern that those rights may have been interfered with unjustly.”